You are here: Home » News » pipe bending machine » IS Double Head Bending Machine Worth for Choosing?

IS Double Head Bending Machine Worth for Choosing? 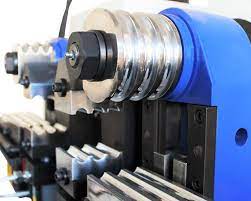 Double head benders are a type of draw bender that is able to produce 2 bends simultaneously while bending 1-3 tubes at a time. You can expect a huge increase in productivity with this type of bender, it will also improve bends because it allows you to control the distance between bends more accurately. Double head benders are used for bending tubes when a little larger radius is acceptable. This type of bender requires the centre line radius of the tube to be at least 2D of the pipe.

The main advantages of a double head bending machine.

Like other pipe benders, the double-headed bender has an adjustable bending angle, from 0 to 180 degrees. Its most important feature is that both sides can be set to different degrees of bending, enabling multiple tubes to be bent at once, and the bending angle can be adjusted to the same angle or two independent angles.

It is worth noting that the double-headed bender can be operated in either automatic or manual mode and has separate speed control on both sides. When using a double head bender, we recommend that the bending speed of the conduit is determined to be 20-40% of the maximum bending speed of the machine is appropriate.

With features such as automatic bundle loading and in-line transfer machine integration, the double-head bender is the prime choice for high-speed bending of symmetrical tubular parts, which can be adjusted in time between each movement. Double-head benders are commonly used for many descriptions of car seat frames, handles, furniture and frames and can be tooled to bend different contours.

The double-headed bender has a high degree of precision and is equipped with auxiliary rods on both sides to act as guides for positioning and forming the product with greater precision. With our double-headed benders, you can control the controls required to perform precise bending, making excellent work stand out.

BTW, we also have an alternative machine for double head bending machine, it is a specially customized machine for a square or rectangle shape bending like luggage case bending,aluminum profile bending,luggage frame bending,window frame bending...